The soundtrack album is an interesting art form. It could be a lot of different songs by a lot of different people that were in a movie all on one CD. It could also be a bunch of tunes written by one person/band all for one movie. Sometimes they serve as a really cool compilation of related songs. Sometimes they are very disjointed. Sometimes a soundtrack sounds amazing in the film and then you buy the album and it doesn't really work as a stand alone album (cough Friday Night Lights cough).

However, when it does work it's a beautiful thing. So this is the first part in a short series of articles where I'm going to shine some light on my favorite soundtrack albums. For this first installment I'm going to be highlighting some Punk soundtracks. 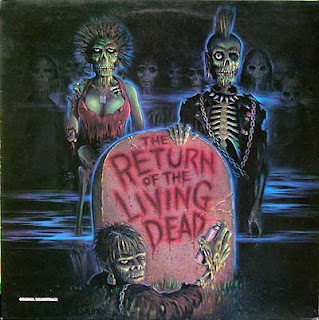 Return of the Living Dead is not only one of the greatest movies of all time but it also has one of the greatest soundtracks of all time. For those of you who haven't seen the movie (you should be ashamed of yourselves) it's, for lack of a better term, a punk rock zombie movie. By definition it's a zombie movie but it's nothing like Romero's bleak social commentaries. It's a dark comedy within a horror movie with zombies. Sounds awesome, right? Well it is but enough about the movie; it's time to discuss the soundtrack. The album is 35 minutes of punk and death rock. It opens with "Surfin' Dead" by the Cramps, which is exclusive to this album and the main reason I bought it in the first place. Then one after the other you get classics from 45 Grave, T.S.O.L., The Flesh Eaters, The Damned, Rocky Erickson and more. It would be almost unethical of me to end the article about this album without mentioning the last two songs. The song's are both by a band called SSQ and they are the most fantastically 80's-ish songs on the album. They're still dark (they were used in a zombie movie) but they have that stereotypical 80's pop sound underneath the dark tones and lyrics about death. The first song is called "Tonight (We'll Make Love Until We Die)." I believe the title says it all and I don't need to explain to you exactly why this song is so good. The last song, "Trash's Theme" is a synth-y instrumental. It's dark and ominous in parts, it grooves in other parts. I love it. 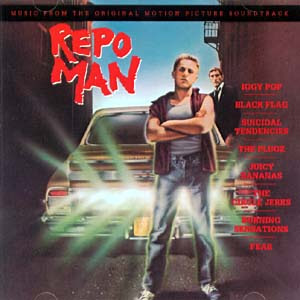 Repo Man is the be all and end all of punk rock soundtracks. It also serves as a pretty decent introduction into L.A. Punk, which everyone knows I'm slightly obsessed with. If nothing else, this soundtrack goes down in rock and roll history for "Repo Man," a fantastic and exclusive Iggy Pop song. After Iggy Pop the soundtrack breaks the listener in slowly with something anyone buying this album is probably already familiar with, Black Flag's "TV Party." From there we move onto another veritable hardcore punk classic, "Institutionalized" by Suicidal Tendencies, quite possibly one of the greatest and most melodramatic pieces of teen angst ever committed to tape. Then We get "Coup D'Etat" from the Circle Jerks' classic third album, Golden Shower of Hits. From here on is where the album starts to tread unfamiliar territory and gets very interesting because of it. For the remainder of the album we get forgotten gems, obscurities, and just plain weird tunes. One band from either the forgotten gems or obscurity category depending on your own point of view is the Plugz who contribute "Hombre Secreto," "El Clavo Y La Cruz," and "Reel Ten." (editor's note: Anyone who's been keeping up with the L.A. Punk articles should recognize the Plugz as having been mentioned in the Flesh Eater's article.) Two songs from the obscurities category mentioned before are "Pablo Picasso" by Burning Sensations, which is memorable for the spoken lyrics and the reoccurring theme of "Pablo Picasso was never called an asshole," and "Bad Man" by the Juicy Bananas. The Juicy Bananas are interesting in that they weren't a real band. They consisted of Zander Schloss (who joined the Circle Jerks on bass in '84 and went on to play in The Weirdos when they reunited in the 90's) and Sy Richardson who played Lite in the film. Richardson speaks lines his character delivers in the film over the music completely composed and performed by Schloss. (movie dork note: Repo Man's director, Alex Cox, made what we will call his 1980's punk rock trilogy. Repo Man was the first, followed by Sid and Nancy, and then Straight to Hell. Sy Richardson was in all of them. He starred alongside Courtney Love and Joe Strummer in Straight to Hell.) The last song to mention is the Fear classic "Let's Have A War" which I would throw into the forgotten gem category I mentioned. Fear don't get mentioned enough but Lee Ving was one of the great front men of rock and roll in general and this is a sampling of his great shout then sing then shout some more vocal style and the sarcastic lyrics he's known for. 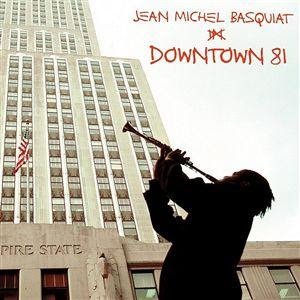 Ever heard of Jean Paul Basquiat? Well this movie, filmed in 1980, is sort of a scripted day in the life of Basquiat. It was meant to be a portrait of the No Wave/Downtown scene happening at the time (which was mentioned in my article about scene comps and my article about my favorite Soul Jazz Records releases) but was never finished. In 1999 the movie was resurrected but the original audio track was lost so they brought someone else in to dub Basquiat's voice as he had been dead since '88. Thankfully, the soundtrack survived and acts as one of the best documents of a scene that was so crazy and original that it deserves every bit of documentation it gets and more. What makes it so special is that a lot of it was recorded during live performances which makes the recordings exclusive to this album and really gives you a feel for what it was like back in 1980. There is so much music on this disc that I can't go as in depth into everything as I'd like but I'll break it up into groups. No Wave is represented by DNA, James White and the Blacks, and Lydia Lunch (formerly of Teenage Jesus and the Jerks). DNA was recorded in the studio specifically for this album while James Chance and Lydia Lunch were captured live playing No Wave classics "Sax Maniac" and "The Closet," respectively. The Mutant Disco/Ze Records thing is represented by Kid Creole and The Coconuts and Liquid Liquid. The dark, mostly synth heavy new wave stuff is represented by Tuxedo Moon, The Plastics and Suicide, who are represented by their song "Cheree" which is actually a very pretty song and not one of their loud, confrontational songs. The hip hop which permeated the downtown scene is represented by a Melle Mel track and one of the greatest hip hop songs ever recorded, "Beat Bop" by Rammelzee vs. K-Rob. Then there's weird stuff that could have only existed in this time and place. Gray show off their dark soundscapes and percussion with the song "Drum Mode" while The Lounge Lizards bring their atmospheric, experimental jazz to the table. Then there's "15 Minutes" by Chris Stein of Blondie. The song is only 46 seconds long and sounds like a beat someone from Anticon would have produced. Walter Steding and the Dragon People's "New Day" sounds like a mix between Michael Leonhart and the Avramina 7 and a Bollywood musical. Last but certainly not least is a recording by the man himself, Basquiat. It's called "Palabras Con Ritmo" and is a spoken word poem recited over a brilliant rhythm track by Coati Mundi with a beat made by congas and other percussion instruments, harmonica, and noises such as crickets and the sounds of far off groups of people cheering. This soundtrack makes for an incredibly varied listen and acts as a very important document of a scene which came and went and can never be replicated which makes this disc an invaluable addition to anyone's collection.
Posted by Kames Jelly at 8:10 AM No comments: