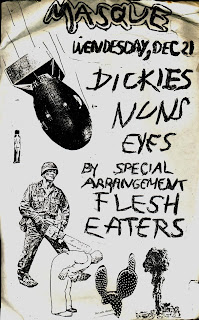 The Flesh Eaters are a fascinating band in the history of L.A. punk. They aren't as much a band as they are a group of musicians revolving around Chris Desjardins. Chris D. is the singer and and main songwriter for the Flesh Eaters (he wrote nearly every song in the bands catalog). He is considered by many, including myself, to not only be a punk poet but to be one of the most poetic lyricists in L.A. punk, and maybe even American punk in general (the only person who comes to mind who gives him a run for his money is Darby Crash). Chris D. knew how to get his ideas across, whether it was writing Flesh Eaters lyrics or writing for Slash magazine. The band formed in 1977 with the first wave of L.A. punk, and became a Los Angeles punk supergroup with a revolving cast of musicians including members of X, the Plugz, The Eyes, Black Randy, and The Blasters. He is a list of their releases during the original run as a "band" between 1978 and 1983. 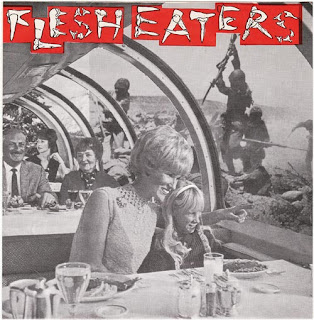 This single was recorded in the summer of 1978 and was released on Chris D.'s own label, Upsetter Records (an homage to Lee Perry). This 7" contains 4 songs, "Disintegration Nation," "Agony Shorthand," "Radio Dies Screaming," and "Twisted Road." "Disintegration Nation" is one of the best Flesh Eaters songs, and one of the classic L.A. punk songs of all time. Chris D.'s vocals are in great form, the music is loud, fast, blaring, and yet has one of the catchiest melodies of the early Flesh Eaters canon. "Agony Shorthand" is another classic. The verses have the idiosyncratic guitar melody and seemingly offbeat vocals, but when the chorus kicks in it turns into a catchy punk sing along: "It's alright with me/It's alright with me" etc. "Radio Dies Screaming" fits in with the early L.A. punk scene better than the other three songs on this single, while "Twisted Road" hits at the roots rock tendencies which would emerge some years later. 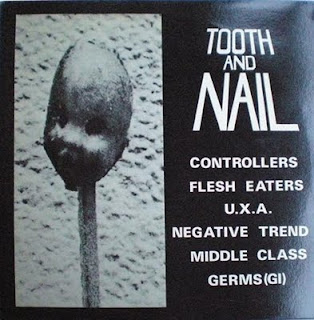 This compilation was released in 1979 on Chris D.'s Upsetter Records. The LP features songs by The Controllers, U.X.A., Negative Trend, Middle Class, The Germs, and 3 songs by the Flesh Eaters. The first two songs, "Word Goes Flesh" and "Pony Dress" were recorded for the compilation. They hint at the sound the band would take on for the upcoming debut album, No Questions Asked. These two songs are also very interesting because of the band members. Pat Garrett (Co-founder of Dangerhouse Records, drummer for the Dils, and guitarist/singer for the Randoms) plays guitar, John Doe, of X, plays bass, DJ Bonebreak, also of X, plays drums, and Exene Cervenka, also of X, contributes background vocals. Basically, all of X but guitarist Billy Zoom are on these two songs. The third song is called "Version Nation." It is a different version of "Disintegration Nation" in which Chris D. kept all of the original music but re-recorded the vocals. 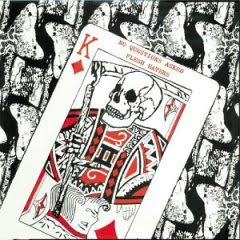 This album was recorded and released in 1980, also on Upsetter Records. This was the band's debut full length. There is not a cohesive band throughout the entire album, different people play on different songs. Featured throughout the album are Joe Ramirez (of the Eyes and Black Randy's band), Pat Garrett (of the Randoms, the Dils, and co-founder of Dangerhosue Records), John Richey (of the Eyes), John Doe (of X), "Maddog" Karla Barrett (of the Controllers), Joe Nanini (of the Eyes), DJ Bonebreak (of X), and Judith Bell (writer/artist who also did the album cover for the Gun Club's Fire of Love album). The album has fast, spastic punk songs (like "Police Gun Jitters" and "Jesus Don't Come Through the Cotton"), more straight ahead, mid-tempo, melodic punk songs ("Suicide Saddle" and "Crazy Boy"), and Chris D. and co. even dabble in reggae with "Cry Baby Killer" which clocks in at 4 minutes and 20 second, at least twice as long as any other song on the album. Every song, even the ones which are more reminiscent of what was going on around them in the L.A. punk scene, has that specific Flesh Eaters feel, with weird rhythms, weird melodies, and those signature Chris D. vocals. Considering the entire album is played by musicians with their own bands, sometimes playing with the other musicians from their other bands, to keep such a distinct sound throughout the entire album is nothing short of amazing.

AND as a bonus, the CD reissue also gives you the 3 tracks from the Tooth and Nail comp, the 4 tracks from the Disintegration Nation 7", and the band's very first demo, recorded in 1978 while Tito Larriva was still in the band (he left soon after to form The Plugz).

A Minute To Pray A Second To Die 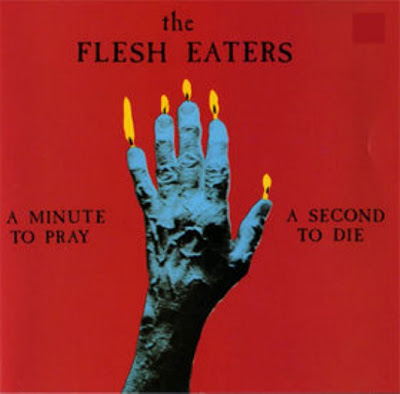 This album was recorded and released in 1981, and unlike No Questions Asked, features a consistent band. This time around, the band consists of Dave Alvin (of The Blasters) on guitar, John Doe (of X) on bass, Steve Berlin (of The Blasters and later, Los Lobos) on sax, D.J. Bonebreak (of X) on marimbas, snare, and maracas, and Bill Bateman (of The Blasters) on drums. This album sounds NOTHING like anything The Flesh Eaters had done to date. All hints of Los Angeles hardcore are completely gone. If I had to describe it as briefly as possible, I'd have to use what a friend of mine called this album when I showed it to him, "punk rock Zappa." It is not a typical album of any sort, specifically because of the weird rhythmic patterns the Flesh Eaters are known for, and because on this album the melody (or melodious noise in some cases) are in three very different instruments: guitar, marimba, and saxophone. The combination of the three form a very unique sound, that is almost incomparable to anything else I've ever heard, however at the same time, you can hear the roots rock that this particular incarnation of the band are so deeply a part of and in love with (The Blasters were a rockabilly revival band, and X were a punk band who's roots were planted deep in rockabilly and early rock and roll). I feel like this is what rock and roll bands would sound like if I were to die and go to some Beetlejuice-like dimension.

*interesting fact: The song "Cyrano De Berger's Back" is one of the only songs in the Flesh Eater's original history not written by Chris D. It was written by John Doe way back in 1976/1977, and a very early demo of X playing this song in 1977, very differently, can be found on the CD reissue of Los Angeles by X.

This album was recorded and released in 1982. Unfortunately this album has never been released on CD, and I haven't yet found myself a vinyl copy. If I do, or if "They" ever decide to release this on CD, I will be sure to include a write up here in this section.

This album was recorded and released in 1983, and was the last album to come from the Flesh Eaters' original run. This time the band consisted of Don Kirk on guitar, Robyn Jameson on bass, Chris Wahl on drums and percussion, Jill Jordan with the backing vocals, and Steve Berlin on saxophone for a couple songs. This happens to be the same band as was used on Forever Came Today, the first time in the band's 5 year run that Chris D. used the same band twice. This album is also COMPLETELY different than A Minute To Pray. It's very heavily based in roots rock this time, as opposed to just being an influence you could pick out. This makes A Hard Road To Follow the most conventional rock album of their career (although it still has that Flesh Eater's deathrock sound, it's less prominent on most of the songs). This album also features two very interesting covers. The first is "Rhymes" by Al Green, and it just might be my favorite song on the entire album. The second is "I Take What I Want" by Sam & Dave, and it features great duet vocals between Chris D. and Jill Jordan. Who knew the Flesh Eaters would be able to handle classic soul songs SO well. Besides those two tracks, the standout originals are the album opener, "Life's a Dirty Rat" and "Eyes Without A Face," which was also featured on the soundtrack to the classic punk rock zombie movie Return of the Living Dead (the soundtrack is highly reccomended, featuring bands like The Cramps, Rocky Erickson, Flesh Eaters, Damned, 45 Grave and T.S.O.L.)

The CD Reissue features 5 bonus tracks, including "A Hard Road To Follow" and "Lake Of Burning Fire" which were from the album sessions but not included on the original album, re-recordings of "Pony Dress" from Tooth and Nail and "Impossible Crime" from No Questions Asked, and a version of "Divine Horseman" from A Minute To Pray recorded live in 1982.

Hard Road was released in 1983, and later that year the Flesh Eater's broke up. Chris D. began singing in front of a new band which he called The Divine Horsemen. This band lasted until 1988, then in 1989 he released an album with a band he called Stone by Stone. By this time SST had released a Flesh Eaters greatest hits LP in 1987 called Destroyed By Fire, and Homestead Records released a life album called Flesh Eaters Live in 1988 (which I found an original copy of once in Cambridge, Mass down the street from the Middle East, but it was beat to shit and the store wanted far too much money for it, so I passed it up, which I sometimes regret doing).in 1990, Chris D. started using the Flesh Eaters name again. SST released another greatest hits package called Prehistoric Fits and then in 1991 the Flesh Eaters released their first new album since Hard Road in 1983. They have continued to release albums sporadically over the past 19 years since reforming, but they don't even compare to the revolutionary music this band made from 1977 to 1983.
Posted by Kames Jelly at 10:07 AM