As I sit here putting off reading an introduction to the theories of gender scholar Judith Butler I started to think of all my favorite female musicians. While music outside of the realm of pop music still tends to be male dominated I can think of more than a few radical and, for lack of a better term, badass women who have undeniably shaped my musical tastes over the years. So tonight, as I continue to put off reading overly intellectual essays on gender I'm going to take a look at gender from the best perspective I can: The music I love.

There is one woman who always comes to mind first whenever I talk or think about female musicians and that person is Exene Cervenka. 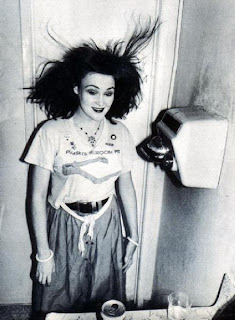 Exene, along with John Doe, sang for the first wave L.A. punk band X (one band that has yet to be given the New Jersey Noise treatment, mostly because of the popularity they have achieved over the past 25 years). She had barely any singing experience, if any at all, before joining X. John Doe wanted her to sing in the band because of her beautiful poetry. He felt the words she scribbled into notebooks would make great lyrics instead. She took the job in spite of her lack of conventional talent and became part of one of the most memorable vocal duos in rock music because of it. Exene had no formal music training and didn't know anything about chords and harmonies so she faked it. When a song called for her to sing along with John instead of singing a conventional harmony part she just sang what sounded good to her. What resulted was some of the greatest punk rock ever recorded. The beauty of Exene wasn't just in the vocals though. The real reason she has had such a lasting impression on me is because she wasn't just the singer. Far too often do women fall into the "front woman" role which does not necessarily allow them to exist other than being a pretty face in the front of the band. That wasn't Exene. She was an important part of the band and existed not just as the front woman but as an intellectual being, a poet and an integral force in the sound that X defined during the course of their career together.

Some highlights of Exene Cervenka's career include:


Another woman who immediately pops up whenever I consider some sort of list of influential and talented women in music is Poison Ivy Rorschach of The Cramps. 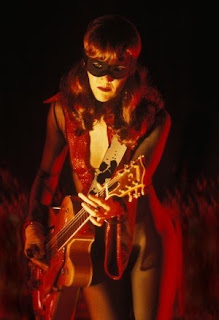 Poison Ivy met Lux Interior (lead singer) in 1972 and they moved to Akron, Ohio together then to New York City in 1975. The band fully formed in 1976 and from then on they changed members every couple of years, but Lux and Poison Ivy were the constants. She was the lead guitar player from the time they formed until they broke up in 2009 after Lux's passing. She was a formidable guitar player and had one hell of a stage presence. She was beautiful and menacing at the same time, luring you in like a venus fly trap and then scaring the shit out of you. The Cramps' musical legacy is iconic to say the least and Poison Ivy played an integral part in shaping that legacy. She shared a passion for strange and obscure music with Lux. They dug for hours through record stores finding amazing and (a lot of the time) demented rock & roll, rockabilly, R&B and novelty records, many of which they ended up recording for their albums. She was just as responsible for making those cover songs their own, so much so that I had no idea they were covers for at least a year into listening to them. She is one of the most criminally underrated guitarists of all time. She never went for virtuosity and casual listeners might not notice how cool the guitar was because people don't usually believe that less actually is more anymore. She didn't need to show off; the music didn't call for it. She created the dark, scary tone that much of the Cramps catalog had and she did it with style.

Here is a list of selections from the Cramps catalog that highlight Poison Ivy's talent:

"The Crusher" from Psychedelic Jungle (1981)

And check out her vocal work on these two:

The third name that needs to be mentioned for this list to be considered at all complete is Wanda Jackson, The Queen of Rockabilly. 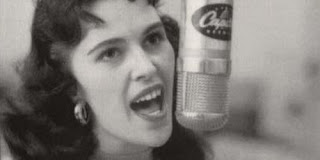 She effortlessly floated back and forth between country and rockabilly and has been recording and performing since the early 1950's but it is her late '50's rockabilly sides that have made her an important part of rock & roll history. Please allow me to take you back to 1950's America for a moment. Women enjoyed a breakthrough in independence in the 1940's when they got jobs in droves due to the country's men being overseas due to World War 2. However, when they came back the women were sent back home and expected to be wives, mothers and homemakers again. The second wave of feminism and the sexual revolution was still a decade away and it was barely even on the country's radar at the time. The ideal home was the Leave It To Beaver home. Then in walks Wanda Jackson to sing some of the hottest and meanest rockabilly to date, as good or better than her male contemporaries who dominated the genre. With songs like "Hot Dog! That Made Him Mad" and "Rock Your Baby" she showed the world that she was an unapologetic, powerful, independent woman who didn't need a man's approval and had no problem making demands.

With the exception of the first song on the list all of my selections of Wanda's best material can be found on Rockin With Wanda (1960), a collection of her late 1950's rockabilly singles:

"Hot Dog! That Made Him Mad"